The New England Chapter’s spring event was a co-organized meeting along with the ASI Digital Publications Indexing SIG and Bookbuilders of Boston, held Thursday evening, April 5, at the offices of the publishers Cengage Learning, which is also an organizational member of ASI.
The program theme, “Indexes in Ebooks and Embedded Indexing” brought together three speakers and an opportunity for discussion. As most of the 22 attendees were members of Bookbuilders of Boston, it was an opportunity to raise the awareness of embedded and ebook indexing among publishers, so that they don’t simply discard the index in ebook editions.
The evening’s featured speaker, Stephen Ingle, President and CEO of WordCo Indexing Services and a past president of the New England Chapter of ASI, addressed the issues the publishers face with digital publications in his presentation “Indexes for Digital Publications: ‘The Battle of the Books’.” The issues to be “battled” and resolved include: whether or not to even have an index in a digital book/ebook, whether a hyperlinked index should be page-hyperlinked (usually based on what was the print page) or precision-hyperlinked (to an element, such as a paragraph), and whether indexes should be fully functional. Fully functional may include allowing user input, taking advantage of the digital potential, and giving the user an improved experience over print.
Marty Rabinowitz, Executive Director of Content Services at Cengage, presented briefly on how Cengage currently handles the indexing process for print products and what is done with ebooks and courseware. Marty raised issues and questions: Do customers find value in indexes? Is it worth the investment? Should we make the same investment for digital indexes as we do for print?
Teresa Elsey, Senior Managing Editor of the group that produces ebooks for the Trade division of Houghton Mifflin Harcourt, presented the process for and issues in converting indexes created for print books into hyperlinked indexes for subsequent ebook editions.
Good questions were raised during the Q&A, and there was time for discussion and networking. The ASI New England Chapter and the Digital Publications Indexing SIG provided food, and there was table of ASI information literature and copies of printed article on digital publications indexing. There was interest in Bookbuilders of Boston and the ASI New England Chapter cooperating in future events. 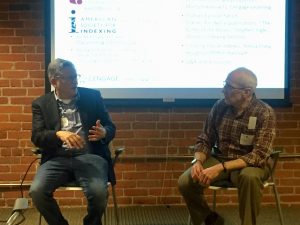